This is where the fun begins.

My first impressions of Mongolia were not so bright. There were absolutely zero trees in the entire countryside. Only mountains made of rocks, dust, and yurtas [round Mongolian tepees]. Sometimes, there was a random little river and some grass. It looked like the boonies of Mexico, where I went for missionary in 2009, except for worse. 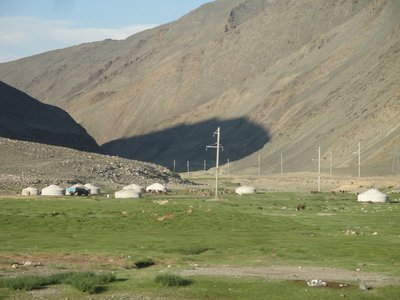 After driving into Mongolia, we stopped in the town closest to border called Tsagaannuur. The moment we got out of our cars, lots of Mongolian kids surrounded us, and we played "duck, duck, goose" with them. 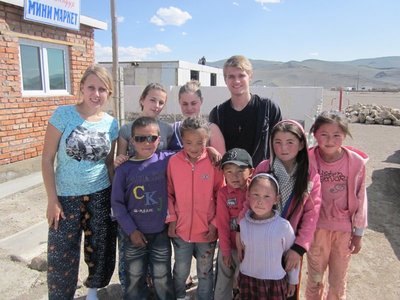 Some Mongolian man came up to us and explained in broken Ringlish [mix of Russian and English] that the river to Ulaangom was flooded and we would not be able to cross it. Although our plan was to do a day camp in a town called Hovd, we were driving to Ulaangom first to pick up our Mongolian translator, Nara.

The man invited us to his house in order show us a map, and we accepted his invitation. Last year, the team from Omsk got lost and went to some random yurta for directions. The family welcomed them inside, offered them some salty Mongolian tea, and showed them where to go. From then on, our Omsk friends thought that all Mongolian people are warm and welcoming - so they accepted this invitation without hesitation.

Our Mongolian friend introduced himself as Kooka. All 20 of us went to Kooka's house and were treated to some dough cakes, candy, and salty tea. 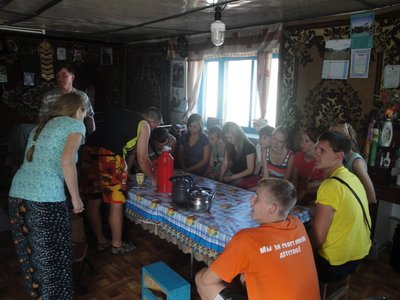 After a long conversation full of charades and Ringlish, we learned that the river to Ulaangom was flooded, but we might be able to cross tomorrow. Meanwhile, Kooka kept suggesting that we spend the night at his house, and continue to Ulaangom once the water goes down. Ultimately, our leader decided to drive the caravan to the river to check it out. If the river was too flooded, we would sleep there and wait for the water to go down. We asked Kooka if he would lead us to Ulaangom, and he agreed to lead us for the first 45 kilometers.

Now, this is where the REAL fun starts. As we were leaving, Kooka called our leader aside and charged him for the salty tea and candy that we ate.

This was unexpected. For as long as the Russians could remember, tea and dough cakes were always free when they visted yurtas before. When the rest of the missionary team learned that our leader paid for the tea, they expressed their disbelief with

"I can't believe it"
and "I didn't trust that guy since I first saw him"
and "If I knew we would have to pay for it, I would have eaten more!"

I told our leader to ask our Mongolian "friend" how much he would charge us for leading us 45 kilometers to Ulaangom, but our leader just blew me off. He told me that if Kooka charges us, we will say "Sorry, we no speak Mongolian..."
If that didn't work, we would just explain to Kooka that we thought his guidance all inclusive into the price we already paid for tea. Our leader didn't seem worried, so I let it go. I warned him, and I felt like that was enough.

We began to follow Kooka, who was driving a dirt bike/motorcycle, out of Tsugaannuur and into the mountains. The road was was dusty and dirty. Oftentimes, our caravan would take careful precaution driving around the cliffs that our Mongolian friend would zoom past like they were no problem at all. After a while, we lost sight of Kooka, who kept speeding away through the winding mountain road.

After driving past a mountain bend, we saw him up ahead, standing next to his dirt bike/motorcycle looking down. When we pulled up, he pointed to the wheel and said "kaputt."

He had a flat tire. He told us to wait 20 minutes, but we ended up waiting for nearly an hour. It was getting dark by this time. The gravel highways of Mongolia have no streetlights to illuminate the roads, so we had to hurry. As we waited for him to fix his flat, 5 dirt bike/motorcyclists passed us, and each one of them stopped to help [and/or rubberneck.] At first I was amazed. Everyone stopped to help out their fellow Mongolian - I couldn't believe a nation could be be so kind to one another. But once I thought about it, I realized that these people live in the boonies of no where - more than likely, they have absolutely nothing else to do. This flat tire was probably the most excitement they had all week. 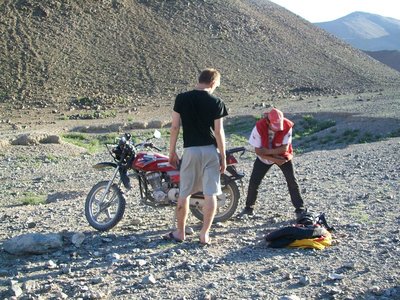 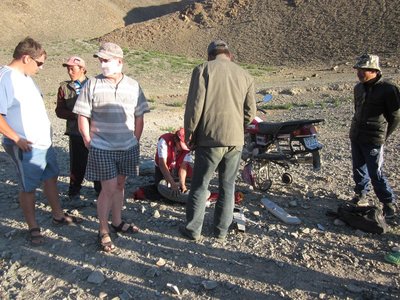 After the tire was fixed, we drove out of the mountains and into a enormous valley surrounded by huge mountains. The roads were horrendous. The Lada got a flat tire. We kept following our friend until we got closer to the river. Suddenly, the roads became muddy and the road was insurpassable. 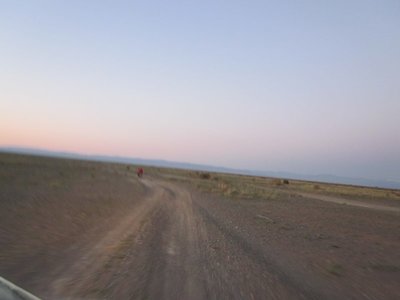 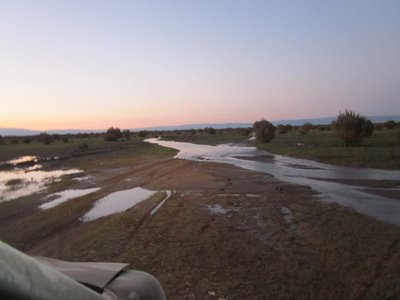 We were 4 kilometers from the river, but our cars could not go further because of the mud. Kooka offered to take one person with him on his motorcycle to check out the river and return.

I volunteered to be that person.

I sat on the back of Kooka's dirt bike/motorcycle, grabbed onto him, and we began our journey alone to the river. Immediately, we got stuck in some mud. I got off to push the bike out, and spent the rest of the ride covered in mud.

As we rode through the valley as nightfall fell upon us, I began to realize the gravity of the situation I was in. I was in an unfamiliar country, full of unfamiliar people who speak an unfamiliar language, riding to an unfamiliar place, holding onto some random unfamiliar Mongolian man I only met a few hours before. What if he decided to kidnap me and steal my kidneys?

But then, I thought about situation logically. I am a huge Ukrainian man, twice the size of this small Mongolian dude. If he tries to hurt me, I could just sit on him and he would die. After this realization, I relaxed and we kept driving.

We arrived at the river, and I saw for myself that it was truly insurpassable. I couldn't see the bottom. Beside that, the current was so strong that I couldn't even walk to the other side. Our caravan would not be able to pass. Kooka explained that on the other side of the river, the road was good and we would get to Ulaangom in only 2 hours. Driving around the river to the bridge would take 11 hours on a very bad road.

By this time, it was dark and the mosquitoes were beginning to bite. We got back onto the dirt bike/motorcycle to drive the 4 kilometers back to our caravan. All of the sudden, Kooka pulls off the road, stops his dirt bike/motorcycle, points to the wheel, and says "kaputt".

We began to walk. I had no idea where we were or to where we were walking. I began to worry, but then I remembered that I could kill this random Mongolian man with one sit, and I calmed down.

Dogs [wolves?] began to howl-bark and Kooka bet down and picked up some rocks. I did the same. We walked to the closest yurta we could find, which happened to be the yurta of Kooka's friend. We arrived at the yurta and went inside. Kooka dropped the rocks before entereing, but I put mine inside of my pockets - just in case.

Unfamiliar yurta. Unfamiliar people. I was in the midst of it all. Kooka and I were seated at the coffee table in the middle of the yurta and offered some unfamiliar salty tea. Beside Kooka's friend, in the room sat a woman, an older woman, and two girls. Kooka and his friend began to talk in Mongolian while I sat and waited. Finally, Kooka explained that his friend could get 3 big army trucks to pull our caravan across the river. He told me to wait in the yurta as he and his friend go get the army trucks. I told him that I needed to get back to my friends because they are waiting and are probably worried. Kooka agreed to take me back to them.

Kooka's friend introduced himself as Nurvec. Nurvec got onto his dirt bike/motorcycle, I sat behind him, and Kooka sat behind me. All three of us began driving back to where we left our caravan.

Though any normal person would panic in this sort of situation, I remained calm. First of all, I knew that God was with me. I knew that a multitude of people were praying for me back home. And I also knew that if these two Mongolian dudes, in between which I was sandwiched on that dirt bike/motorcycle, tried to hurt me - I could just sit on them and they would die.

Posted by DanPan 09:29 Archived in Mongolia

Previous Next Table of contents

Comments on this blog entry are now closed to non-Travellerspoint members. You can still leave a comment if you are a member of Travellerspoint.

If you aren't a member of Travellerspoint yet, you can join for free.